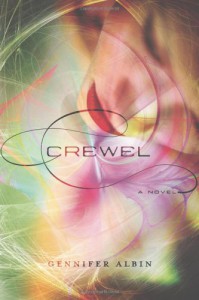 New year, new reading resolutions: I will no longer force myself to finish disasters... and from all the reviews I've read after I found myself frowning upon what I was reading.

the girl passes a body-bag with her father's body in it, and a couple pages later she's thinking how handsome some guy is... WTH?

(show spoiler)
it appears that that was only the beginning for a train-wreck.

The girl is just your usual Mary Sue. With her bland Mary Sue voice. Making stupid Mary Sue mistakes. People! I am too old for this crap!
I know the cover is pretty, but that's about it.

In twenty percent there has been no world building. Just some random information about the world the story takes place:
_ Probably in the future... there's some strange words thrown in -_-
_ There's gender segregation;
_Apparently the only jobs available to women are ones of secretaries... ?? And that is if you fail the exams to become a Spinner...
_Some people decide where we will live, and with whom we get to live...
_Food sources became scarce? Since there's control over who gets to have kids...and over the food rations.
_Makeup is a bad thing!!
_Girl on girl hate... just because -_-
_Every girl wants to be a Spinner because GLAMOROUS LIFE Y'ALL!

Also, like I mentioned in a status update, after _ and even before! _ being imprisoned in a cell, the girl has been ogling guys left and right... and she has been trough a makeover!
Honestly, I don't even know why I am DNF this crap amazing piece of YA romance??
Off to find a good book!