The gang goes on a road trip... 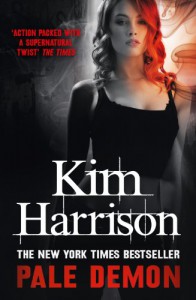 A strong instalment to the series: Rachel has only a reasonable amount of tstl moments in it. Understandable, due to what she goes through in this..."episode" _ a lot, as usual .

This is the most chaotic series that I've ever read: There's a witch, that may turn out to be an actual demon..but she doesn't want to be a demon.

She wants what she's had her entire life...if only people would leave her alone!

But now in her life there's a living vampire, a family of noisy pixies _ with the occasional fairy _, a demon who once was the big threat to her life, and now is more like a comforting presence? Yes, I am talking about All.

An ex-coven witch who was killed and buried alive _ *shiver* _ on what is now Rachel's and Ivy's _ officially more like Jenks _ church grounds, and may now be a sort of significant other to Rachel...if only he didn't insist on killing demons.

Now, imagine all this people, together, in one car.....

Yes, it's a mess. An insane _full of non stop adventure _ mess.

As always in the end, Rachel ends up, in even dire straits that the ones she started in, to begin with.

You know? Basic, Rachel Morgan's insanity all around.

Oh, and a secret about Trent is revealed, lol, and I am not going to say which one. ;)

But it was nice to see Rachel and Ivy finally _ Oh, God, I hope it lasts! _ come to an understanding. I was getting sick and tired of their back and forth dance.