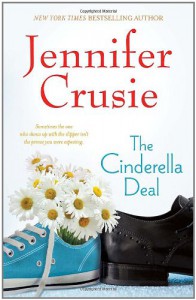 This is a story that i can't even complaint on how much it disappointed me...

I picked it up because i just wanted a nice, fast read to just "cleanse" my mind for the next "earth shattering" story that happened to come my way!

So yes, i just wanted something fluffy to read! Something that would just leave me with a stupid smile on my face, and that i would mostly forgot in the following week.... o_O

Instead i got a novel capable of rousing my inner feminist...not that she needs being roused much...but, *you know!*

Okay, this story, _how should i say this _ could have been written in the fifties, sixties....top eighties!!! That's how dated it feels!

But, no, apparently it was written in the end of the twentieth century, em 1996!!

I don't get it!! o_O Was this some sort of veiled attack on feminism?

The main characters are card board stereotypes, worst that most of the harlequin characters books that i read about two decades ago!!

Daisy our main character who is a free spirit, and who "as such", uses long dresses and a weird looking hat, is a painter...well she was a teacher who decided to quit her job to pursue her dream...

Years later, she is still trying to survive and things aren't looking good.

Now Daisy our free spirit through the course of the book will see how important it is to change her way of being...because she was just being childish...

She will have no problem getting married due to money difficulties..

Changing the way she dresses...

Basically *growing up*, until her way of thinking pretty much corresponds to her husband way of seeing things...

Then there was an ass, who could and SHOULD be arrested, due to sexual harassment, but which she endured up until the end.

Basically most of the woman  that where presented here, were seen as weak flowers...and the ones that didn't, were just  disagreeable b*****s!

The "good woman" in this book, is the little wife type who stays home, and who is kept by her husband. Of course she is the artsy type, and she has all the adjacent stereotypes that come with this role.But check this out:

She is so AMAZING, that she's even capable of predicting when she will get sick, so she takes care of all the bills, and of all the things that had to be done, in order for the poor little dark, brooding, sexy husband of hers won't have to overtire himself!! Then she has this amazing smile that makes all the men around her go insane.. As for the husband, he got a really round, amazing body to got with the deal...i lost track to the number of times that this word (round) appeared!

As for her, she got security with her marriage. Yay....

If none of the above gets on your nerves, then go ahead and read it! Its quite a fast read....

If however this troubles you..better skip this one!

Honestly, if this was a Cinderella Deal i would just continue keeping the wicked stepmother's company!!