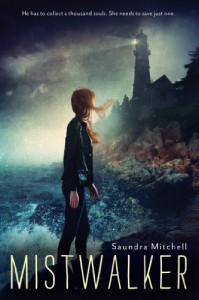 On the cover it says: Creepy, romantic and oozing with atmosphere...

Not quite. More than creepy, this is the heartbreaking story of a girl, and of her family, trying to deal with the aftershock of the death of one of it's members: their son, and Willa's brother.

No, this doesn't have a romantic bone in it. We all know that romance sells, especially YA romantic stories, but this story, isn't more of the same, so do not expect romance in it.

Yes, amazingly so. Beautifully done, this is one of those books in which you can almost feel the elements pressing down on you. In these case, the mist and the fog.

Biggest compliment about this story?

I am not even sure which tags to use towards this story... this is not a fantasy book, it has some paranormals elements, but this is a story mostly rooted on earthly elements. In this case, the sea.

To label this a contemporary, it would be just too misdirected... so, I guess I am going to go with magical realism story. And maybe I've got it all wrong, but I can't help feeling that this wasn't directed at it's appropriate audience. I think that fans of author Sarah Addison Allen would love this story.

The story is one of coming of age, at a time when everything seems to be set in stone, when we  know that it only takes one thing, to make it all fall apart...

This is what has happened in Willa's life. Her brother died, and she's been drowning in guilt ever since.

So when she finds herself all of a sudden, thinking about the abandoned lighthouse a couple of miles of her island, reality and the unexpected, suddenly collide.

In the lighthouse, Willa will meet the Grey Man, not an ancient being of power and elemental power, but a boy who like her, also found himself attracted to that island, and to the girl that at time lived there...

For a hundred years, Grey has been "living" under a curse. Just like a prince in a fairytale, the lighthouse is his castle, and he can have everything he wants... except being truly alive, and abandoning the island.

When Willa starts taking notice of the cursed island, and of Grey himself, he believes that the time has come to shed his burden, and that Willa will be the new lighthouse keeper, allowing him to get back to a body of flesh and bone.

But what would prompt a young girl to leave everything behind and sacrifice her life in order to take her place as the Grey Lady of the lighthouse?

Let me tell you this: Just when I thought that I was seeing where this was going, the author pulled the rug under my feet!

Bottom line: I completely fell for the storyline, but this had some uneven path...

I love beautiful language, and this has it in spades... but, the pace of it, at time drags somewhat, which may cause some irritation (side effects, and stuff, lol) on other readers. Especially if they were expecting a story written more in the fantastical side of things.

But in the end, I loved the fact that this wasn't a story about a girl who fell for a boy, and how her life got transformed because of it *eye roll*. I loved that the parents weren't missing in action, but instead were a vital part of this.

I loved the fluidity of the end, and the message it carried.